A solitary figure off the beaten path,
The air a palpable gloom
Be it mortal or shade of someone passed,
No longer in want of a tomb
Betwixt a shuffling gait and steady pace,
A sole impression leaves foliage displaced
This mark being the only telltale trace
It may be of flesh and blood,
And not trick of the moon

At a glance, one clothed in religion,
Or belief in superstition,
May perchance, mistake this form,
For haunting apparition
Till the snapping of dry twigs and leaves,
Ragged garments snagging trees,
Footfalls placing fauna ill at ease
This IS flesh and blood,
Allaying all doubt and suspicion

A weathered woman of years gone passed,
Exuberance of youth, long ago
Whose leathery hide, worn and cracked,
Lays bare a tale of hardship and woe
Though she’s endured this life cruel,
Her gaze still pierces deepest blue,
That belies a fire ‘neath azure pools
Her body a shell, scorned and wracked,
But the eyes, windows to the soul

This corporeal form, not shade,
But mere mortal deduced
Wrapped in cloth tattered and frayed,
Sway from limbs like hangman’s noose
Though the night’s biting chill, ill-favored,
She does not stumble, falter nor waver
Not till completion of one final labor
Then Death take hold the reins,
And shuffle the mortal coil loose

Through the tangle, muck and mire,
Every inch of pernicious terrain,
Punishes flesh, but heart’s desire,
Stokes the embers that keep her soul aflame
Aided by moon’s celestial lighting,
Quells the fear within from rising,
As journey’s end meets the horizon,
A blighted vale where devils conspire,
Where darkness and despair hold domain

Amongst the dead and dying trees,
A monolith of crumbling stone
Gateway opened, not with man-made keys,
But forgotten tongue from forgotten tome
This ancient ruin with obscured glyphs,
Gently brushed clean with calloused tips
Whispered words from cracked, parched lips,
Spill forth with unhindered ease,
Like oft spoken lines from cherished poem

Through parted lips, unfiltered words,
Hang heavy on the autumn breeze
An incantation profane and absurd,
With pressed palms and soiled knees
Then a deafening clap like thunder,
Splits the bark and stone asunder,
Unblinking, her eyes transfixed with wonder
Beneath the cloak of night something stirred,
Within the smoldering debris

Amidst the rubble, a stifling plume,
Coalesced from ash and stone
Sears the throat with each breath consumed,
Seizing muscle and aching bone
Then a much welcomed reprieve,
Unfettering her senses and lungs to breathe,
As the expelled miasma slowly recedes,
And takes on an appearance that mirrors her own

From blackened debris this phantom figure,
Whose form and features, to her’s, akin
Its visage a reflection, not of her cold exterior,
But tempered rage contained within
Under its gaze, a violent shiver,
Her once steady hands, now a tremor,
Its eyes a cauldron of glowing embers,
Set ablaze with devilish grin

Watch for more works like ‘Revenant (pt.1) – A Blighted Vale’  by Raven Mirthwood as he starts publishing. You can find Raven’s author page on The Creative Exiles at Raven Mirthwood (creativeexiles.com) 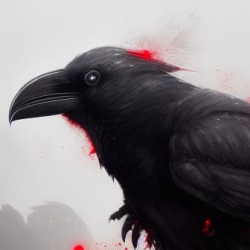 The Colors of Summer

A Dedication To Running

A Dedication to Running 1.) Running towards peaks for the sake of a good run to sweat off poisons.

When the Night’s Weren’t So Cold

Too many times, mostly when I’m watching Something reminds me of days long past Days when things had a different

She walked unseeingly, her heels clicking on the pavement. The grey skies were just a reflection of how she