Grandma was the most fun person we ever knew.  She was never too busy to play with us, or tell us stories.  Our favorite game with her was hide-and-seek, she had places to hide in every corner of the house or the garden.

“Caught you,” we’d yell when we would finally find her and she would laugh so hard her belly would shake.  She never got upset when we made fun of her shaking, jiggly belly, she only laughed harder when we pointed it out.

“I have a fairy living in it, she makes all that fat jiggle when she’s happy,” she would say.

Grandma was born on Halloween.  Every year, we would have great parties at her house on Halloween, celebrating her birthday, as well.  She has a huge pumpkin patch in the garden and the pumpkins were ripe by the end of October.  We were allowed to bake and eat the smaller ones, then dry the seeds for later snacks.  She used the bigger ones to make the best pumpkin pies and pumpkin cakes we could ever imagine.

She used to talk to her pumpkins and her plants and flowers.  When we planted the pumpkin seeds, she taught us how to ask them to give us the tastiest and sweetest crop.  All the neighbors from the street knew to come to Grandma’s during harvest time, and for weeks around Halloween the whole neighborhood was one huge party, eating Grandma’s pumpkins in every way possible.

But Grandma was getting old.  When she was ninety, she started slowing down.  She was still happy to see everyone, and remembered all of her great-grandchildren (she had thirteen of them), as well as all of the grandchildren and great-grandchildren of her neighbors and friends.  But by this time, we mostly visited her for the stories.

We would sit on her magic carpet and we would listen to her as she would take us away to a magical land right in her garden.  She had fairies and gnomes, witches and giants, fire breathing dragons and magic flying horses living in her garden.  Her plants came to life and protected her when she needed them, her magic tree could turn her whole garden and house invisible when she needed to hide.

“What were you hiding from, Grandma?” we asked.

“During the war, the planes would drop bombs all around us.  My tree didn’t just make us invisible, it made every bomb avoid us.”

“Was your house really invisible?”

“To them, for sure. And it was all due to this gnarly tree, with the twisted trunk.”

When Grandma turned 99, she asked me to sit down with her.

“I need to ask you something, but this is serious,” she said.

I never heard her say anything serious, so it was a bit scary.

“You need to promise me that you will do what I ask you,” she continued.

“But Grandma, how can I promise if I don’t know what you are asking?”

She was waiting.  Finally, I said:

“And make sure you keep this promise, no matter what your mom or anyone else says.”

“Grandma, you’re scaring me.” I told her.

“Just promise. I will die soon and I’ll miss seeing you and your kids. All I am asking you to promise to do something for me after I die.”

Well, I couldn’t say no to that, so I promised.

“Ok, so listen. I will probably die on my 100th birthday.  Don’t ask me how I know.  You’ll understand everything as you get older.  Remember all of my stories about my magical creatures and my garden? They are all real.  And you are the only one who will see them, because when you were a kid you believed in them and deep down you still do, even if you don’t want to admit it.”

“First I will have to ask you to take care of them, and keep telling their stories.  They will die when their stories die.” She continued. “That will be the easy part.”

“Ok, I promise to take care of them.” I said, though I wasn’t quite sure I believed in them. But I loved telling their stories, so she was right, it was easy.

“You’re not so sure they are real, are you now?” smiled Grandma.  “You will see them, but only if you can find your old child self who believed in them. I know you will.”

“Now, the harder part.  When I die, you will have to make sure I get buried in my garden. And no fancy coffins or anything, just put me in the ground under the gnarly tree.”

“Mom won’t let me, she thinks you will need to be buried in the cemetery, in sacred ground.”

“All ground is sacred,” she said, impatiently.  “Your mom should know this, but she chooses not to remember.  So, this is why it will be difficult for you to make sure this happens. I will leave it in writing, but you need to make sure it will be as I ask.”

“And now, the most important part.” I could see her mischievous smile, I knew it would be something interesting.

“So, exactly one year after you burry me, dig out my bones.”

“Yes, way, you already promised!” she laughed.  “If you don’t, the tree will do it anyway, and you don’t get to enjoy me later on.”

“Sure. Your magical tree.” I joked. “That’s not possible.”

“Yes, it is and you know it. Let me finish. When you dig me out, I should be a skeleton.  Try not to break me when you take me out, but if any of my parts break off, it’s ok, just put them back together.”

“Grandma, you’re gross! And crazy!” I couldn’t help laughing though.

“Yeah, well, I always have been, right?”, she laughed, but there was no fat on her belly to jiggle any more.

“Seriously, take me out and paint me blue.”

“Oh, no reason, just because blue is my favorite color. I always wanted to be blue.”

By now, I was convinced that Grandma lost her mind for her old age, but I thought I’d play along.

“Don’t think I don’t know what I’m talking about,” she said, as if reading my mind.

“Ok, I will paint your bones blue. Then what?”

“Then keep me out and let your kids play with me.”

“Have you lost your mind, Grandma?”

“They will have the most fun with me, I promise! You know that I would never hurt them. I will be able to play with them, and I will be the best baby-sitter you could ever wish for.  Besides, I will tell them all the stories you grew up with and more. It will be great, you’ll see.”

As I listened to her, I got caught in the moment and wished that it could happen the way she described it. I wouldn’t have to miss her, I would have her with me – as a blue skeleton.  The thought made me laugh.

“Sure,” she said with her mischievous smile. “There is one catch though.  I can only be alive on the week of Halloween. The rest of the year you should keep me in a box. And, of course, you need to dig me up on Halloween.”

“Oh, Ok.  Then on Halloween we can have the best parties, just like we do right now.  With the addition of a live skeleton.  Grandma, you’re a genius!”

“And by the way, so are you,” she added. “That’s why my magic creatures and plants will listen to you.”

“Anyway, will you paint the inside of my box blue?”

“Ok, no problem.” I smiled. “I guess you want to see blue when you wake up every year.”

“How about I also paint your favorite flower, the baby’s breath on the top of your box?”

Grandma died on the following Halloween, on her 100th birthday, just as she said.

I made sure we buried her under her gnarly tree, then exactly a year later I dug her out.  It was Halloween.  She was a skeleton, and she was grinning.

It was a weird feeling, getting hugged by a skeleton, but I knew it was my grandma, and I felt warm and fuzzy inside.

“Now let’s get that party going!” she said.  But please paint me blue before anyone sees me.”

“That’s how Grandma Bones came into our house.” I finished the story.

“I’m so glad she did.” My seven-year-old granddaughter said.  “Halloween would not be the same without her.”

She hugged the blue skeleton as she pulled her out of the blue box.

I based the story on an idea by my 12-year-old daughter, Karen Fromm. 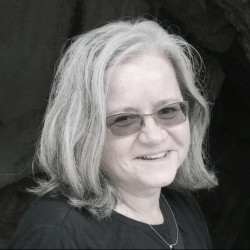 Follow me
Emese Fromm
I love words, in a few different languages. I am a writer and a translator.
I grew up in Transylvania, where I spoke Hungarian at home, Romanian in school. I wanted to be a writer. But writers didn't exist in the Socialist Republic of Romania. With every word censored, no one could write, so I studied math and computer programming instead.
Now I live in the Sonoran Desert. I travel and write.
And sometimes I work as a translator.

Follow me
Latest posts by Emese Fromm (see all)

I love words, in a few different languages. I am a writer and a translator.  I grew up in Transylvania, where I spoke Hungarian at home, Romanian in school. I wanted to be a writer. But writers didn't exist in the Socialist Republic of Romania. With every word censored, no one could write, so I studied math and computer programming instead.  Now I live in the Sonoran Desert. I travel and write.  And sometimes I work as a translator.

Redwood Trees – Journey Among the Giants

Hilarious Laws on the Books Across the United States

My Father’s Rose – More Than Just a Flower

Transforming the World, One Soul at a Time

Gary Snyder Haiku I. THE BEAT POET a “The Dharma Bums” sat upon my nightstand for almost twenty years. A

Shopping With an Influencer

Her beauty tiptoed in timidly but she let her arrogance stroll From a distance, she laughingly made preparations First, the

Bob Grace was a contented man as he sipped his sweet coffee and gazed out the window at the last,