There stood the garden wall

The garden belonged to Mr. Hall

who was selfish and clever.

with flowers and mango trees

so he built the wall

to protect the mangoes that fall.

It was not a crime to be selfish.

The point of all this

is to enjoy while you

One day a young boy

and gave the police a call.

Then he stood up and

ran towards the boy,

but he got away

and so the war began.

Once the boy waited for

only to find a dog in

the garden without a leash.

The boy wanted the mangoes,

Mr. Hall was not ready to let go.

The boy tried again and again,

but all his efforts ended in vain.

but his victory was not glorious.

He took a mango slice in his hand,

when he took a bite he

realized something not right.

Mr. Hall was overwhelmed by guilt.

He worked all his life so that

he could have some peace at old age,

but now all his 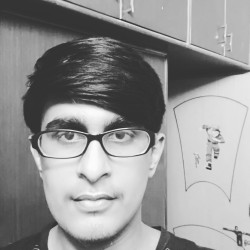 Abhimanyu Gaur
I always had a love for writing even when I was still in school. I used to collect good quotes and admire them. I enjoyed the beautiful play of words so I started writing poetry. Life is too short to understand, but it is long enough to stand with your fellow man.

I always had a love for writing even when I was still in school. I used to collect good quotes and admire them. I enjoyed the beautiful play of words so I started writing poetry. Life is too short to understand, but it is long enough to stand with your fellow man.

In Your Net, I’m Caught : a Love Story

Old Mother of the Mountain

Maddie remembers ~ Granma sat me down and told me about Old Mother of the mountain. I was just fifteen