This time the FEDS had a search and arrest warrant. When they knocked I looked through the peephole and told them that men and women in black suits were not welcome in my house.

They kicked in the door knocking me flat on my butt. I came up swinging and doing that Tai Chi thing some guru taught me. I got two down with a head butt and a sweep kick akimbo took another out with full-on tackle but they kept coming and I was smashed face down on my 100 dollars a square foot fancy wool carpet.

Dirty dogs, with the commotion they woke up my son and wife who came out screaming like pissed off banshees from hell.

Handcuffed and thrown into a back seat of a black Suburban I waived all my rights and spilled my guts and told them where to find my contraband. They had me dead to rights. Two went back in the house but another just sat back reading a file with the charges against me. I was fully guilty in my transgressions.

They came back towing my family. They were horrified but not arrested. On the spot, they testified against me with so much as a threat of incarceration. They had turned on me faster than one of those spinner things I had bought my son for his birthday.

I was staring out the window seeing the quarter moon and Orion constellation in the sky. I reckoned that was the last I would see of it but it still filled me with joy. My son gave me his infamous cockeyed smile and a wink. He knew I was going down.

Just then a black Cadillac limo pulled up and a mountain of a man with fists the size of a newborn Wolverine stepped out and went around and opened the door for a 6’5″ sophisticated man in a 2,000 navy blue suit emerged with a gunmetal blue 45 strapped to his hip.

Life was going to get more ugly before better. All the “agents” in black suits came out of the house and my family was released. I thanked God that they would not go with me to the black hole of the slammer.

The man went in the door for a mere 5 minutes. And he came out shaking his head.

“There is no damning evidence here,” he yelled at the men. “Yes, sir” was the reaction from those not hurt by our earlier altercation.

He came around and opened the door to the Suburban and said: “Dr. Dierker you are free to go for now”. At that point, I almost got pissed off but instead invited him in for my special Artichoke and raw honey tea.

We sat at the kitchen table and related stories of service of duty in a land they call “the swamp” or DC. My wife and youngest were listening as they created the delicacy of a Paella we were laughing too hard and slapping our knees like the two Okies we were.

At around 5 am he and his team were leaving as we hugged and shook hands like old friends promising to stay in touch. They were a special branch of the “feds”.

They are called the “happy” police. And they were trying to find evidence about why my family and I were so happy. They could not search my heart so they came up empty-handed. 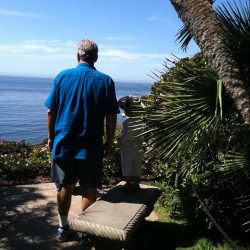 Writers on the Web by Phyllis Doyle Burns

5 thoughts on “The Feds Came By”

Memories From Under the Mimosa Tree

Time to Dream of Garden

Time to Dream of Garden I. A new apple tree in the center of my yard it is good to

Of Bees and the Sky Acrostic

Of Bees and the Sky … There are things worthy of spending time on. There are areas of life that

Somewhere in time, you my dearest friend and I, thought that we could share – a love so true and